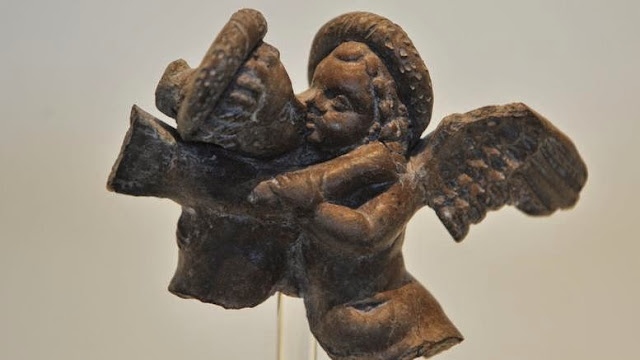 In the story of love and "since time immemorial" toys, undertakes to introduce visitors to the Archaeological Museum of Pella. Love and Maya ...
Instead of fleecing daisies, the ancient Greeks-that they too erwteyontan- they had their own mantika games of love.
And had God the praise. The same love as God, small, chubby, winged, sleeper, usually solitary, sometimes fitted with soul and sometimes only with his arrows.
And had them-young and old- the games themselves, through which invoked the
help- in the "love" of their daily lives for divination, before being sacrificed on the altar of ...
(E), beyond, things sobareyan. Though the little winged God take longer quiver with arrows and was leaving, leaving aniatoys, the victim resorted and in. .. the chthonioys demons in order to "tie up" the match of ...
"Games of love"
In the story of love and "since time immemorial" toys of, undertakes to initiate children and adults ... "on substantive jurisdiction» (due and the abundance of relevant findings) Archaeological Museum of Pella, on the occasion of the forthcoming day of lovers.
The authority is today and will be repeated daily until the end of the month, with their ... small and the "Games of love" (educational program for students Iv, V and Vi Grade, and 1st Gymnasium).
Platagwnia, yiges, and battalions for small ... Kottaboi and katadesmoi for big ... 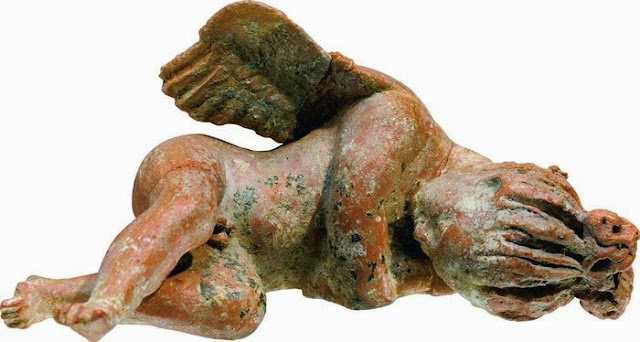 Red poppies and the intensity of love diaisthiseos
And if today we say ... "plucking the Daisy", with the repetitive question "m" loves – den m ' loves ', until we finish the petals ..., the ancients tell platagwnio (seen as ' rattle ', but the sensuous "divination" and used it as indicative of the intensity of passion ...).
Here, used the petals of a poppy (Red), the player forms a circle with your thumb and index finger of the left hand and places a poppy petal. Click with the right hand circle and from the volume produced "sounds" and the erotic tension ...
The iynx (or iyga)- disk metal or bronze with two holes in the Center, from which passes thread. The Player keeps loose thread, the stretches and relaxes short, up the drive to start spinning and produce sound. Volume H is corresponding with the ... asking intensity of love she feels the or ... the pothoymeni.
Children play with love
"Children will have the opportunity to learn about the games they were playing the in love to spend their free time or to predict whether persons who had thought were in love· from the innocent platagwnio of children, the iygga or the diamond, the ankles and the Mora (epallaxis fingers), until the kottabo of adults, some of which were played until recently and is a good opportunity to xanapaixoyme», says the archaeologist of the Archaeological Museum of Pella Nikos Pappas, who took over and guided tour of children in ... hard world of lovers.
"We prepared, Indeed, for the xenagoymenoys and modern wooden yiges to play and second-guessing their own erotic " says Mr. Pappas.
Mighty as love death
As for the big; Here things are more ... hard, as ... "mighty as love death". Is the title of a unique Museum event –, aimed at adults, will be held on Saturday afternoon 14 February and the tour will be in all the exhibits.
At the event for adults, the unique maybe game is "kottabos" (game of skill playing the ancient Greeks in night symposia with much wine ...).
Pella: One of the more "erotic" museums
As one of the most ... «sex» museums, like that of Pella (hosts at displays of the worldwide best-known statuettes of love, clusters of Cupid and psyche, the goddess Aphrodite, but numerous vessels – even castings vessels of 3rd and 4th century BC by the ancient Pella, with engraved inscriptions – protreptikes erotic acts) It's probably ideal to accommodate the timeless celebration of love.
"Venus aposandalizoysa" – statuette found in tomb of Pella in the 4th century b.c., romances, series of exhibits with the ... briefing note "the vases depict shapes coitus with protreptikes inscriptions operations» are just some of the exhibits.
"The gar much begets erotos str. insanity ..."
The first martyrimeno ' Macedonian ' text (in language Doric – Greek) is the curse nine lyrics found incised in leaden plate (katadesmo), wrapped in right hand dead at uncovering (the 1986) Tomb of the 4th century BC from the market area in ancient Pella.
Find, exposed today to the new Archaeological Museum of Pella, writes: (in translation):
"Thetimas and Dionysofwnta the official marriage tie with Maya written and all other women marriage as many are widows or virgins, but especially of Thetimas. And drop the spell in Makrwna and the demons. And if ever I unearth him and xetylixw and read these words, then to marry the Dionysofwn and not before. Because I don't want to get another woman from me, but I loved along with Dionysofwnta and no other. I beg you demons regret the Kiss because I'm helpless and have left all your friends. Keep the letter for my not happen and to lost the Thetima, but I'd be happy»…
Away from demons but "Mighty as love and death" is the theme of the event on Saturday, organized by the Museum for the adult guests (the event draws its title from the ' song of songs ' Solomon).
Visitors will have the opportunity, through the picture, the narrative and poetic discourse, reciting and acting, to travel into the past, that taught us the omnipotence of love
Narrated Nikos Pappas (Archaeologist)· Recitation: Anastasios Papanastasiou (Actress). Intermediate vacuums I heard lyrics and music celebrated authors.
Source: The TOC, with information from Ana – MPA
SOURCE = http://maiandros.blog-spot.gr/2015/02/11/m-agapai-den-m-agapai-erotiki-mantia-stin-archea-ellada/#comment-4980