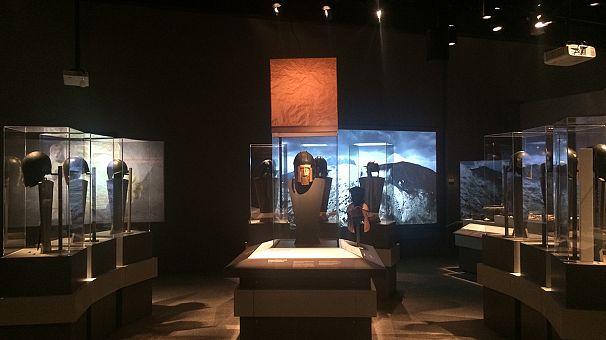 With headlines tributes and soapbox titles like "The glories of Greece" welcomed Canadian SME large exhibition "The Greeks: By Agamemnon to Grand Alexander», launched in Museum Culture Canada, in Ottawa, which accepts annually 1,2 EC. visitors from around the world.

The exhibition "The Greeks: Agamemnon to Alexander the Great »designed by the Ministry of Culture, Education in collaboration with the Consortium of four major museums in Canada and US: Pointe à Callière Montreal Archaeology and History Complex (Montreal), Canadian Museum of History (Ottawa), Field Museum (Chicago), National Geographic Museum (Washington). It includes more than five hundred exhibits, masterpieces of ancient Greek sculpture, painting and kosmimatotechnias, from 22 greek museums. 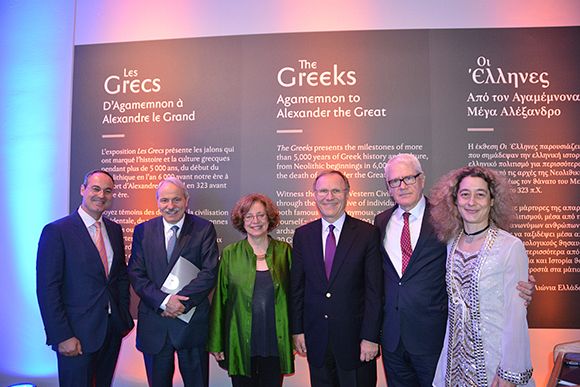 With most of the exhibits to travel for the first time in museums B. America and a museological inventive design, focusing on man, and a wide variety of interactive happenings, and modern technological means, The report has already been presented with great success and spectacular turnout of visitors at the Museum of Point-a-Calliere Museum of History and Archaeology in Montreal.

From the 5 June to 12 October continues its journey to Canada, He will be presented in the History Museum of Canada in Ottawa. Then he moved to the Field Museum in Chicago (24 November 2015 until 10 April 2016) and the National Geographic Museum in Ouasigkt0n (26 May 2016 until 9 October 2016). 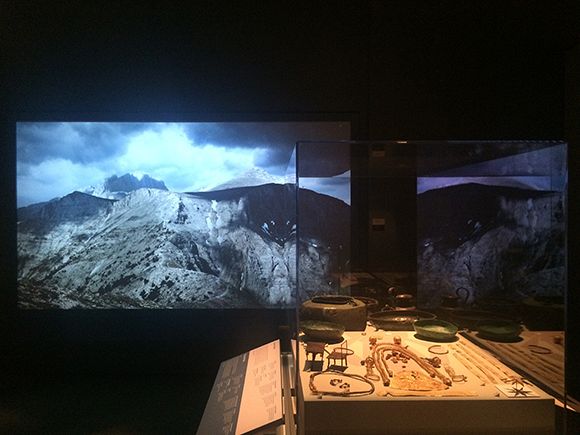 The central theme of the exhibition are the Greeks as forms through the excavation data, starting from the anonymous illustrious dead, moving the mythological wanax Agamemnon, the aristocrat last name and ending with eminent personalities of culture, as Plato and Aristotle, and historical figures, like Philip and Alexander the great.

The exhibition, time frame which covers from the Stone Age to the Hellenistic period, i.e. from the 6000 e.g.. approximately until the 2nd century. e.g., structured in ten modules.

1.Prelude: The man in the prehistoric Aegean

In sub-sections presented works from the Neolithic period in Greece, as amulets from Aravissos. The presence of Cycladic merchants and seamen declared by burials from Amorgos, Naxos, Paros and engraved ship illustration in frying pan from Syros.

The royal shaft graves of 16th century Mycenae. e.g.. create the basis for the myth of Rich Mycenae Homer. The "Prince of Assini", seals and gold rings with performances of cult scenes, figurines from the cult center of Mycenae presented, inter alia, in this section. 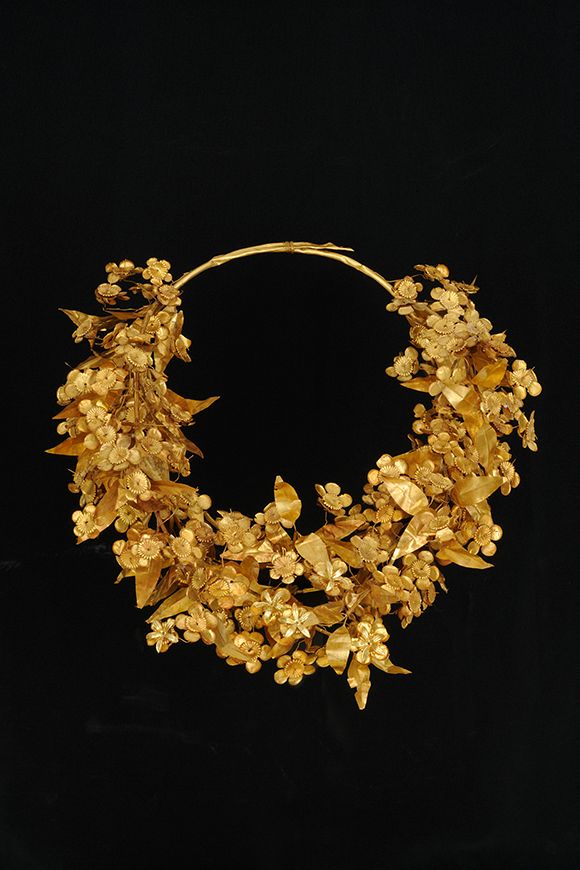 The heroes of Homer associated with the gods to stand alone, powerful and dominant human form.

Since the end of the 12th century. e.g.. important events form the transition from the palace in the "city- state", movements Greek tribes, establishing colonies, new economic centers and cohesive nation bonds. They will be presented including the Homer head of the National Archaeological Museum, the scene of the blinding of Polyphemus, the "burial" of deirotomithentos from Eleftherna.

The fighting spirit of the Greeks depicted the headstone of discus thrower, in copper pan- dedication athlete in the Sanctuary of Zeus at Olympia, the Panathenaic amphora of Nafplio Museum with match race. 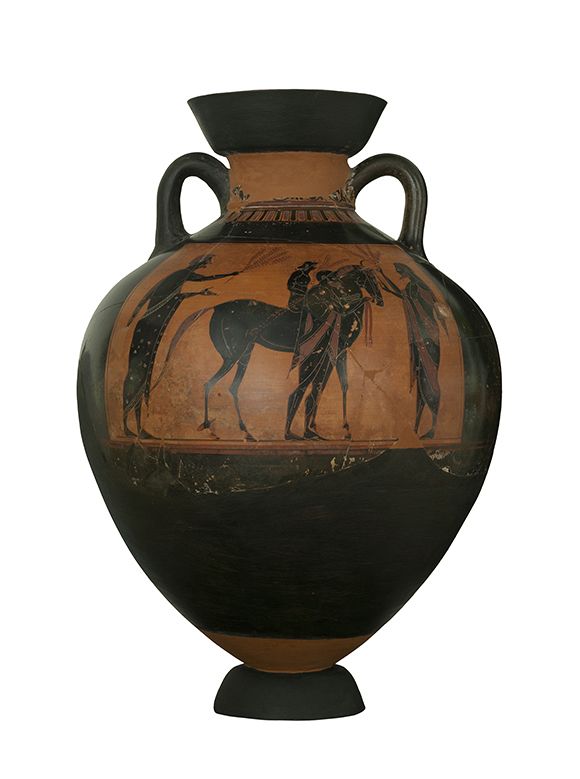 From the 7th century. BC evolution in how imaging of the human form is remarkable. The kouros, naked young man, it is set up for more than two centuries imposing sanctuaries as "statue" for the god or grave marker for mortal. The pupils will be set up as bright images of feminine grace and modesty, the temples of the gods and in tombs as "signals". Kouros from the Sanctuary of Ptoos Viotia comes from the Archaeological Museum of Thebes and the daughter of the Acropolis Museum.

Legendary hero of the battle of Thermopylae. The arrowheads exposed from the scope of the historical battle. 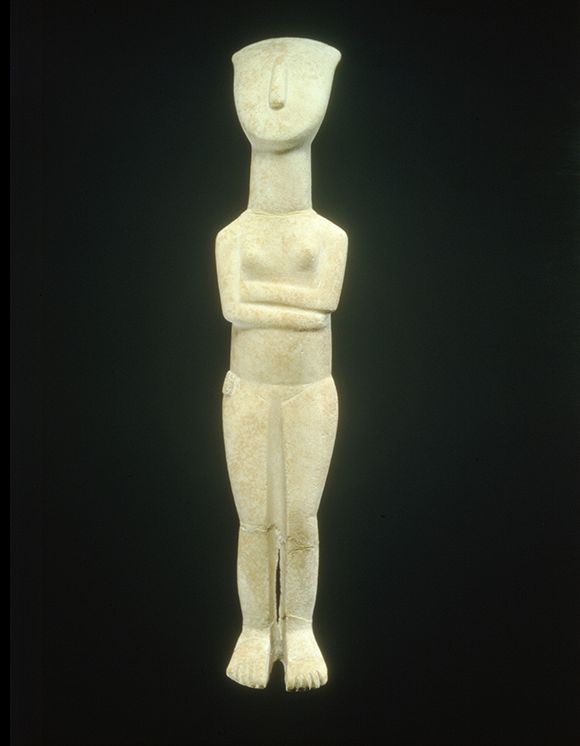 The policy, military and economic rise of the Macedonian kings with the consequences of the known world projected by presenting plastic works, painting and jewelery from the Archaeological Museum of Thessaloniki, Aigai and Pella. Features exhibits are silverware from the tomb of Philip II, gold wreath Aigai, gold medal Olimpiadas. Under dominates the head of Alexander from Pella.

10.Alexander. The dawn of a new world

The report of the Hellenistic figurines from the Archaeological Museum of Pella marks the time of the successors of M.. Alexandrou