Amphipolis.gr | THE LATEST MERES ALEXANDROU AND PERSONS OF THE MYSTERY TAFIS

THE LATEST MERES ALEXANDROU AND PERSONS OF THE MYSTERY TAFIS 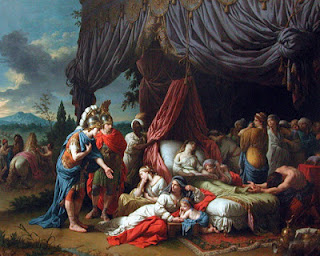 Written by Chris Mparmpagiannidisena of the greatest mysteries of history, affecting up to nowadays the, all kinds of, researchers, is the sudden end of Alexander the great and the adventure of the mortal remains of. Guesses and estimates give and take over the centuries, However no clear, final and absolutely convincing answer don't we have in our hands. In this perpetual Vortex cases, the least we can do is, with ally the most reliable sources, to illustrate the tragic those facts and let everyone move on his own crises. The last known Alexander's business plan was the campaign in Arabia, which went a little parapisw, due to the sudden death of Ifaistiwna. Alexander, Since he was a majestic funeral with prices on hero child friend in Babylon, the days those were devastated and depressed, However he participated in sacrifice for the impending departure in Arabia.We are located at 28 May 323p. Ch. The same evening, after they left the close associates of the dinner they had cited, one partner Thessalus, the Midios, invited him to his home. The Midios was likable and amiable to Alexander and the actually made the mood. Next he went on Midioy and drank excessively. Unwell in palaces turned, loystike and fell into bed with a high fever. On the morning of May 31st, She felt even worse. All the thrills and adventures of recent years, the numerous symposia, had weakened. Even went to his bed at the altar for the daily morning sacrifice. Lying, invited the heads of the army and gave orders for the campaign that would begin at 4 June. The night to pull him back onto the bed on the Euphrates and by ferry passed across to the large garden which dominated there. Bathed having fever and shivering. The next stayed on with kamara company Midio, He made up. Though, the fever does not fall.

At 2 June asked nearchos be postponed for a day the campaign did and recover. Nearchos of told his journey into the ocean (Indian) and Alexander would rejoice that we lived and that such adventures. At 3 June sacrificed and shouted the heads of Navy, asking them to be all ready for the impending departure in two days. Though, the fever and malaise continued to pay and the next couple of days. At 5 June urged all generals in the Palace. He acknowledged them all, but he could no longer speak. Meanwhile, throughout the Babylon learned the fact of sickness and Macedonians soldiers in strimwchnontan Palace to see their King. Feared lest he had already died, While wept and threatened to open the gate. Eventually, the gate opened and one behind each other went to his bed. Alexander anasikwne won the head and bit his right hand and egnefe with the look on old companions. At 9 June, the generals Persuader, Peykestas and Seleucus, went to Serapeio temple to ask what was best to do, staying in palaces or carry him somewhere else. The "God" gave them the response: "To stay there, better would be ". And the next day, at 10 June, Alexander died. Wailing and odyrmos resonated in the chaotic halls of palaces. Then silence fell. He covered them all thinking what would happen now. All Babylon found outside the Palace and the future looked dark and ominous. Just from this moment and for some forty years starts the famous adventure story of his successors!They said that gave his ring, shortly before he died, the oldest of the seven bodyguards, the Perdikka, to seal some documents, but it is doubtful if the appointed heir. Alexander those moments of sternes, Neither could speak, nor had mental clarity to make such an important decision. The point is that from the first day of his death riots erupted between military units of the Macedonians, until you come, After some time, a compromise, brittle as it turned: the half-brother of Alexander and mentally unstable (to put it elegantly), Philip Arridaios and the unborn child (If were boy), defined as Kings of the great Macedonian state anymore.

According to Diodorus, Alexander had written in written pleadings of five designs, which were rejected as extravagantly and unrealistically by the Council of generals. The most important was the construction of a thousand warships for the campaign in the West. The second was the construction of six huge churches: in honor of Zeus at Dion, Artemis in Amphipolis, Athena at Kyrro (between Pella and Edessa, South of the village Aravissos), Delos, in Dodona and Delphi. The third draft was talking about setting up a gigantic pyre in Babylon at the cost of many talents, to honor the memory of Ifaistiwna. The fourth project involved the construction of a pyramid, greater and of Egypt, in honor of his father, Philip. The latter was designed exchanges and population movements between Europe and Asia, in order to achieve this coalescing, they had expected Alexander, between East and West. However, Arrian, that is the most reliable source, Once retrieved from the notes of Ptolemy and Aristovoulos, who lived the events next to Alexander, writes: ' Personal, I cannot say with precision what plans had Alexander nor I care to guess. But what it seems to me that I can say is that Alexander had nothing small or insignificant in his mind· nor would remain uneventful in areas that had already conquered, even if you add the Europe to Asia and the British Isles. Over and above these, I wanted to find something unknown yet, erizontas not with anyone else, but with himself ". Arrian, (G):1 However what,What's he thinking of, the bottom line is that nothing reared. The case or the category that Alexander found death by poison – a low dose of strychnine would fit with the symptoms – it was inevitable. Indeed, the "Kingdom Newspapers", official State Archives, published a document that was contradicted something. However we cannot exclude. Maybe some top Macedonians had no other way to stop the megalomania of exorientalistiki, I had him make very distant. Now as regards the speculations that died from disease syphilis type (the most widespread kafeneiaki view) or from typhoid or from something else unknown, We cannot adopt, and certainly not to the reject. 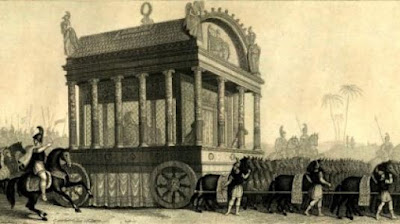 The luck of the corpse is an unsolved mystery. His body, After taricheytike, She stayed almost two years in a luxurious tent in Babylon, where was a pilgrimage site for thousands of nationals of. Then it was decided to be repatriated in Macedonia, to be buried in the old Royal Cemetery at Aigai. Though, on their way thither, was stolen from the new satrap of Egypt, Ptolemy of Lagoy, one of the children's companions of Alexander and his classmate at Aristotle's teachings, in Mieza, He was exalted to the rank of Marshal of the new empire of Alexander. Ptolemy buried the first bunch in Memphis, the old capital of the Pharaoh. Later, the bunch in his capital, Alexandria, where from 306p. Ch. ruled as King of Egypt. The brilliant mausoleum and Tomb survived even during the era of Octavian Augustus, the first Roman Emperor (29e.g.. – 14 m h.). There are later references suggest that the place where it was located was still known. From late Antiquity, however, (about 3om. X. αι.) and after he has disappeared without leaving any trace. Therefore, in accordance with references sources, the corpse was left two years ago in Babylon and after stealing it from Ptolemy, resulted in an imposing monument in Alexandria. These reports are that more official we have in our hands. Alexander's mother, the cunning Olympiad, She was convinced that her son was murdered and had vowed that he would bring the bunch in Macedonia. Did tried something and succeed; But again, knowing the megalomania and aytarchikotita of, will bury so in secret and "some smart Roadsters leaked", without fanfare, her son, the Conqueror of the world; The sources do not make nor allusion to something. Something I had written about the burial of the largest King of the world! Does the next King of Macedonia, the able but ruthless Kassandros, the bunch on home turf; Unlikely! Firstly, because the Kassandros with deadly misoyntan Olympiad. Secondly, If you bring the bunch in Macedonia, It would be a great advantage, primarily moral and psychological, for Alexander the Iv, his son Alexander the great, that was an area which in honorary captivity together with his mother Roxane, in Amphipolis. It was known that the Macedonian people were loyal to the official Royal House and kassandros won't riskare the consolidation of power. But Ptolemy did not eventually took the bunch from Babylon but a fake of; Maybe in Alexandria all venerated a Cenotaph; The fact is that getting the bunch, gain a psychological advantage over the other successors. It is undeniable that many Macedonians soldiers followed Ptolemy in Egypt simply because he owned the bunch. So big specific weight and influence mystical dimensions arise from possession of corpses of great King! Definitely, Ptolemy took the body having awareness of his great influence on simple Macedonian soldier. It is unknown how many soldiers, Apart from his great reputation, considered worthy successor of Alexander, Tolomeo, Once up and his great King "follower" General. However, from political tactic Ptolemy took out! 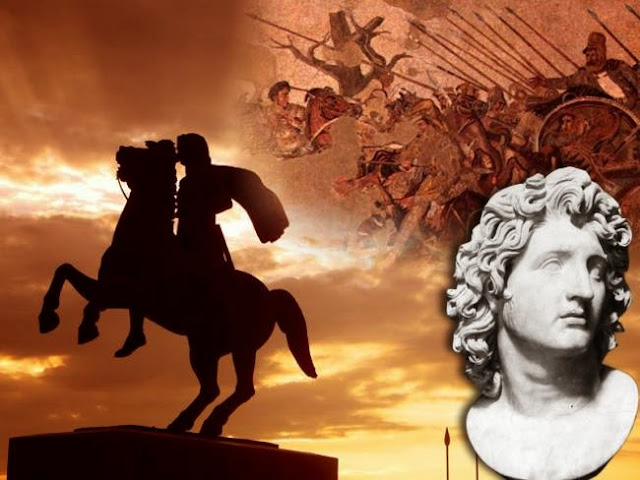 But if we take the official view that Soros moved indeed and was buried in Alexandria, What was then; We could assume, that's when Alexandria was a Christian city, the authorities and the citizens of Christians made disasters of buildings of national. Know the violence of the Byzantines and the annihilation of thousands of followers of the ancient religion and monuments of. Likely, the tomb of Alexander to fell "victim" of this Christian fundamentalism. But if something similar happened not, Maybe the raids of Arabs, eventually conquered Egypt, to complete the destruction of the monument. However, all are assumptions. cause of death, the grandiose plans and his tomb, remain a alytos puzzle, a great mystery, that may be and preferable outcome, If there is, this eternal search. The metaphysical dimension surrounds this exploration, maybe make it more charming. Indicative bibliography Johan Gustav Droysen: The story of Alexander the great, Ed. Eleftherotypia Paul Cartledge: Alexander, the search for a new past, Ed. Livanis. Plutarch: Alexander, Ed. Cactus. Diodorus: Historical Library, Ed. Zitros. Arrian: Anabasis Alexandrou, Ed. Cactus.