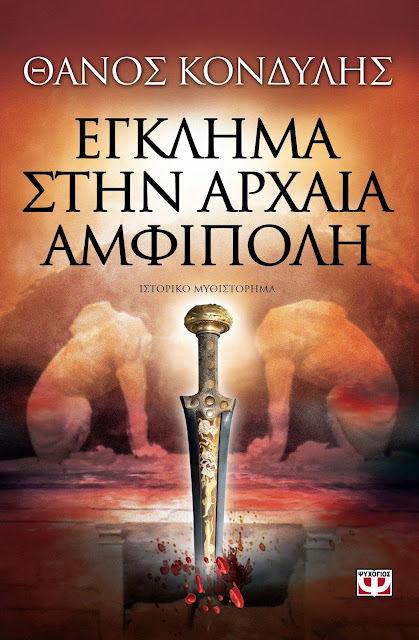 Atrocious crime in ancient Amphipolis! Five bodies dipped in blood and a suspect compose the puzzle of heinous murders. But nothing is as it seems or as the true perpetrators wanted to look ...

The lifeless bodies flying over their data "reveal" the perpetrators. He who undertakes to unravel the thread of the case is none other than Alexander the Athenian ... The hero of Thanou Kondyli in his second adventure captivates the reader until the last page. With the movements of breaks omertà villa and reveals a sensational case that the murders were the tip of the iceberg. The author of "Crime in Ancient Amphipolis" Thanos account "interrogated" by the Docket for new and unsettling book responds with openness to the questions we. Enjoy the interview below, but read the book which will win you from the first moment ... "Nothing is as it seems and nothing is harder than the truth". "Crime in Ancient Amphipolis", a book that you worked long. Why your project you distract many positive reviews and opinions. You think that is one of the spearheads of your writing course;

«It is one of the most important of my books with historical content. I had three months research in libraries and about seven months to complete. The history of ancient Greece in each level is passed through these pages. Well not accidentally has addressed the audience who loves Greek history and quality readings. I believe that such a book was missing from the Greek market of novel and so I wrote ".

This is the second adventure of Alexander the Athenian, so why the action this time moved and unfolded in Ancient Amphipolis;

"The CRIME IN ANCIENT Amphipolis is the second adventure of Alexander Athenian, Judge now arrives at Amphipolis, Athenian colony to Macedonia 5the century BC. X. This city was not accidental for Athens. Basically it was a, where possible, city ​​- a copy of the metropolis and thus of equal. With this novel, than other, I want to show the reader the imperialist policy of the great power of antiquity, Athena's, which largely operated in the ancient world as today America. I had no better choice than the ancient Amphipolis. I always thought that the past can teach us many and so chose Amphipolis to the center of my novel ".

"One in both the rulers is not bad to keep in touch with the world. Listen to the needs of. And I believe that it is imperative ... "What happens in our own contemporary political society;

"Probably not. the princes, Whatever they, Today minimally engaged with the world. Unless they are election season and so beg the vote tazontas "hares with stole" as the saying goes. Unlike ancient Greece where politicians were circulating among the people, was a citizen among citizens, nothing more and nothing less ".

"She left leaving behind a smile that promised much. I went back in the sea. I closed my eyes and let myself hear the call ". Woman and sea in a snapshot ... At that time Alexander conquered the Athenian both creating the "fiery thoughts". Eventually the fire, the woman and the sea are integral parts of our lives;

"For fire and the sea do not know. inevitably though – and personally I would say, especially for women ... EFTYCHOS present among us! think, what would be a life without female; Nothing. The world will not proceed. The life of man depends on woman multiply, and I do not mean only sex. The female is essentially the essence of the existence of this world, from any point of view. Here I will say something else. Remember that before what we call "historical times", the woman, form of, was the dominant worldwide. Especially in prehistoric times was the only "God" that honored by people. The transition of societies to a new level during the historical years brought the total reversal with most dominant males, even at the level of the gods ..., that mean that!».

"If it was an island I would say that I was in the islands of the Blessed, where the souls of the righteous man and "Olbia heroes go" ... that says the poet Hesiod. We now today we have forget the life we ​​do to seek these islands;

"Unfortunately today people do not deal with ideas but just things. In other words, are not interested in the ideal and the ideal only what they see their eyes and what they catch their hands. I believe this is the greatest degradation of our culture than the culture that had developed the ancient Greece and which is largely based on the ideas, the non-material world, but without being relegated and the world of things and the senses. I think it was a balance that has now been lost ".

"The moneylenders are the worst enemies of citizenship and democracy collectively", Alexander said the Athenian referring to Chrysanthos. Really what he would say if he lived today that the entire planet is a prisoner usurers gang;

"He just would stoically confirmed his view. Generally the world of ancient Greece did not differ much from the current world. Alexander was a pragmatist of the era. He had his eyes open and profession listens more than anyone at the time of. Well I do not think that would feel and great surprise if he lived today ".

Could Areopagite keep the information appeared in the beginning and closed the case against Chrysanthos. But did extensive research and piece - part completed jigsaw puzzle of multiple murder. The role of the judge proved important for the life of people like respectively doctor. The faith in the administration of justice is armed with patience and faith people until our days;

"Think, these two elements are home every man who believes in the divine and that justice is a final expression. Especially nowadays that lawlessness is almost status, justice is really stability pillar of our society ".

How important were the findings of the coroner to clarify crime;

"The medicine was of the greatest sciences which flourished in our country since ancient times. Well I could not not to mention. Together and philosophy and mathematics. StoEGKLIMA IN ANCIENT Amphipolis medicine and its representative, Alexander's friend Judge indeed prominently ".

A person of "bottom" of society was this whose testimony essentially corroborated the conjecture of Aeropagitou. This shows that we must respect those who are next to us as "high" and "low" and if;

"The testimony of that person was actually an auxiliary. But nothing could help itself Alexander. Essentially a meaning and an idea that I pass the text is that the logic has many aspects and their combination and only one leads to the solution, or if you want to redemption ".

"I remembered the saying attributed to known Chilonos the Lacedaemonian, the "Meden Agan" ... "The exaggeration hurts but not seen from our history and from our DNA that we are people who do not have any measure;

"Correct. And this is one of the basic meanings of the story will read. The exaggeration hurts everything - even at the level of love – never benefit. Unfortunately Greeks are, consider, people of extravagance and many times we think we can do things beyond our powers ".

The Ktisifontas the architect is the "key" of the past and today;]

"Correct. In this particular part of the book the reader will read the fictionalized version of how possibly began building the current tomb in Amphipolis and will receive information about how the ancients honored their dead. You will be pleasantly surprised "!

Why would someone choose this book now summer among dozens of titles in circulation;

"The CRIME IN ANCIENT Amphipolis is a book that conveys Greece from the first to the last page. Why would someone choose a book that is unrelated to our beautiful Greece; Why would someone not read a good historical novel that beyond the pleasure not to learn five things about the history of our beautiful country; This is a book that gives us all this and more. Anguish, Answers to questions about human nature, of how thoughts of our ancestors, for life itself ".

End, "Crime in Ancient Amphipolis" what is your own view on the discoveries made last year and if you think Amphipolis is important deposit of culture and ancient history and why;

"Indeed Ancient Amphipolis is a culture deposit in Greece and the world at large. My personal view is that we have much more to see and learn from the tomb of Amphipolis. I also believe that over time was used by our ancestors, hence the remains of five frames. But let's have a little patience, until they come for official announcements by archaeologists on the mound, so too will solve our many questions ".

432 e.g.. Alexander Khan, Aristocrat and Supreme Court, switches to Amphipolis with a mandate to review the functioning of the judicial system of the new colony of Athens in Macedonia.

One day receives an invitation from a friend to attend a two-day symposium in an enormous villa outside the city. There you will meet many people and a beautiful slave, the Evmorfia, you love him. For two days will be left in the fun and love, But the day will awaken the screams of despair and cries of pain. Will rush and will be found in front of the corpses of some of the diners. You will immediately begin intensive investigations and interrogations.

They will very quickly realize that several had serious motives to commit murder and benefit in different ways. But what Alexander did not suspect is that the killer continuously monitor and, quaintly, leads his steps. Whither we; In death;

Ancient Amphipolis relives through the pages of this mystery and love story with an explosive rate action and unforeseen developments.

Two words from the author 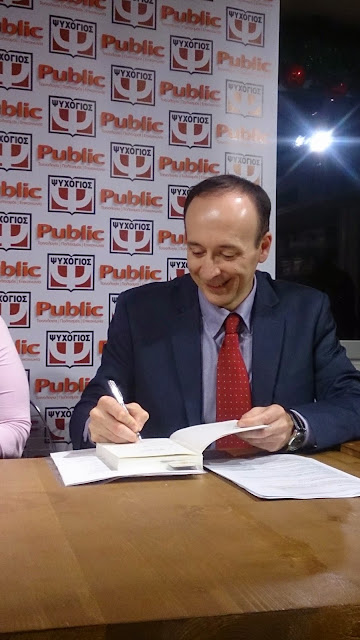 "This book literally breathes the rhythms and sounds of ancient Greece. In its pages emerges from the past Ancient Amphipolis shrouded in mist of mystery knit novelist, so wanting in my own way to revive the history and the present in modern Greek reader as an admirable piece of the ancient Greek world "

"This book literally breathes the rhythms and sounds of ancient Greece. In its pages emerges from the past Ancient Amphipolis shrouded in mist of mystery knit novelist, so wanting in my own way to revive the history and the present in modern Greek reader as an admirable piece of the ancient Greek world "