Home Al - posts Selective Amphipolis.gr | Because the ancients were putting water in their wine

Amphipolis.gr | Because the ancients were putting water in their wine 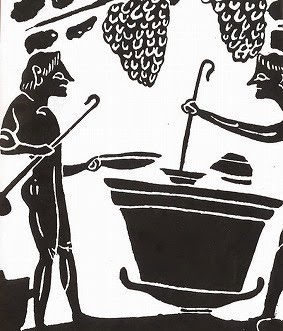 Our ancestors, written by m. (A). Tiberius, rarely drank the wine "akraton". The mix of their secured with water, In addition to mental clarity and cooling beverage

Often, and particularly now in the summer, become a recipient queries relating to whether the ancient Greeks had substitutes for existing refrigerators and even if they could they start cooling as the various drinks. In both questions the answer is positive. However even the most brief their development requires an area that exceeds the limited space of a epifyllidas.

So I will confine myself to the second question, epifylassomenos in another, I also hope summer, epifyllida to deal with the first. As it known, the first’ drink par excellence of the ancient Greeks was the "divine wine". Men, women and children geyontan the divine drink and especially the first, they were chatting and interminable hours they talked every day on andrwnes drinking wine. The participants at these krasokatanyxeis don't usually lose their clarity of mind because the wine consumed were watered-down. Rare, and for very specific purposes, the ancient Greeks drank wine its, «wine» akraton. 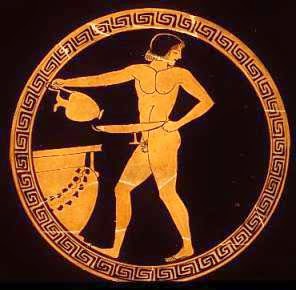 The blending of wine with water was done in large wide mouthed vases, known as craters, and the usual proportion was three parts water to one wine. This analogy suggests and Hesiod, the rural poet, There are however written testimonies that speak of mix with water in a larger proportion. This dominance of water was that prevented many unpleasant situations for drinkers. Features are the words that puts the comic poet Alexis (42nd-3rd century. e.g.) in the mouth of Solon: "Already from the carts the sell (the wine) watered-down, not of course to earn more, But why provide for buyers, have some wine after the head light» (translated by. M. Kopidaki).

The water used for the thinning of wine took care to come from ' pagan ' skiaran (source), from "krinin aporryton" or aenaon and from "pit psychron". So along with the mix of their ancient wine achieved at the same time and cooling. Very widespread practice was to use water from snow melting, which, as we all know, the sustained even in summer and bagged. However they had invented and special ways of wine cooling. Around the middle of the 6th century. e.g.. devised a crock special construction that allowed cooling of wine and keeping it cold as he was stored in large vases stenostoma, in amphoras, before it moved to craters. More specifically constructed a special type of amphora with Hallmark duplicate of walls. With the help of internal walls created the first’ space par excellence of the vase, in which weeping, from the mouth of, wine. The space formed by the outer walls and surrounded the Interior was filled with the help of a prochois who stood at the top with cold water or snow. Thus successful permanent cooling of wine, After easily could renew the coolant, When this melted and was already boiling, with fresh. Through a single hole located at the bottom of the vessel shut the hot water and then, sfragizontas the, throw in the exterior space of fresh snow or cold water. Such vessels, known to archaeologists as amphoras – freezers, built in the second half of the 6th century. e.g.. in Athens, but in another part of the ancient Greek world, probably in Reggio Calabria of Magna Graecia, in n. Italy. Similar construction details that successful wine cooling fluid and generally we meet sporadically in other oinofora vessels of the ancient Greeks, e.g.. in old.

In the third quarter of the 6th century. e.g.. Athenians kerameis found another way wine cooling that served the needs of symposiastwn. The previous, you just described, require rapid consumption of wine from the moment it was passing from the amphora – freezer in the crater. But if the rate of consumption was slow, then the wine inside the crater would lose the freshness of. This created the need to invent another way that would ensure permanent cooling of wine. I.e., When I filled the wine glasses of ancient Merrymakers, known primarily as a cups, It should be still cold or cool. Coined so a feature manitaroschimo vase, which, Once filled with wine, placed inside the crater was filled with cold water or snow. A successful way of cooling which reminds him with whom today we maintain cold champagne or a bottle of wine as the place inside in a trough containing ice cubes. The wine obtained from the manitaroschimo vase stenostomo, freezer, as it was called in antiquity, with the help of a basket that had long handle. The container that the ancients called arytaina or kyatho. It is very likely that the wine in these was its freezers, so the araiwma of was done in retrospect, within the same wine glasses, with cold water that brought in a pitcher, the ancient jug. Etsi, Besides mixing of wine, successful at the same time and better cooling of.

That manitaroschimoi freezers, who with the tall leg and inflatable body "floating" inside the cold water (or in the snow) of the crater, wine is today contained certain. Apart from some related performances, the witness and three distinctive vases made relatively recently known in research. It is basically three craters that are embedded inside a freezer. I.e., crater and condenser are in these cases a single construction set and for’ This blood vessels these call craters – freezers. At the bottom of the bearing spout, whose presence is justified only if we accept that through this away the warm water of the vase anymore, When you renew the coolant material. Therefore the wine required must be located in the freezer vessels;. Furthermore, There is no doubt that the vessels that had function similar to that of amphorae – freezers we saw above. Cooling way just described has been in use for 80 years and more specifically by the 530 as the 460/50 e.g..

However the craters – freezers do not seem to have been particularly frequent in antiquity. Sporadically occur in other seasons, e.g.. one found in Mycenaean Tiryns and dated to the 13th century. e.g.. The scarcity of them must be due to the fact that the ancients prefer a little more red wine that does not require special cooling. But especially in that, as I said above, water with which were the wine took care to be "frozen" so that it doesn't require any care for further cooling of the divine this drink.

Mr. Michael S. Tiberius is Professor of Classical Archaeology at the Aristotle University of Thessaloniki.