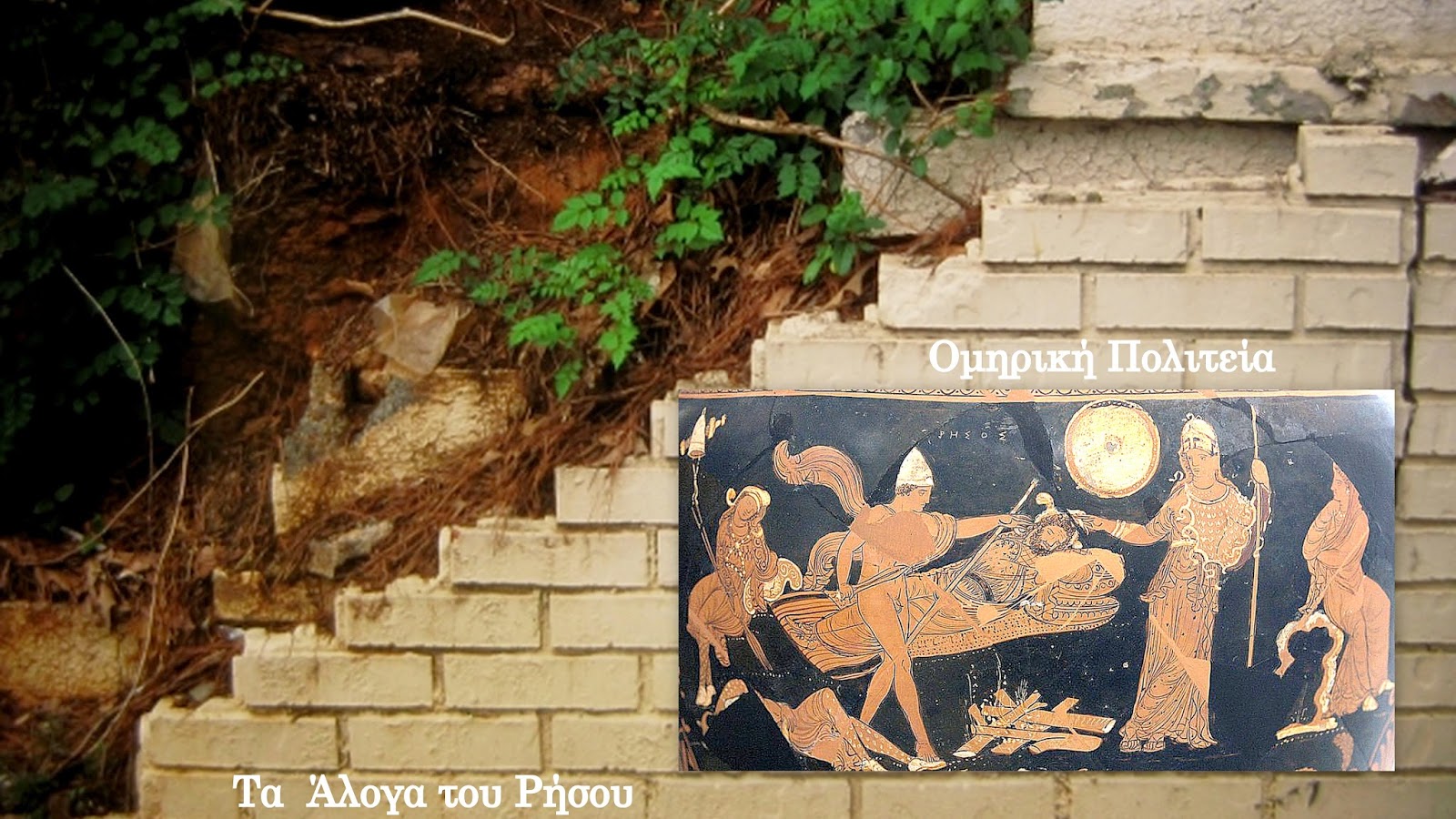 The white Horses of Risos

The most ancient and most likable of the demigods of the Thracian King was an elevation of the, the Rhesus, for whom spoke first Homer, they consider him son of Iionea and King of the Thracian who raced to help the Trojans in the Trojan war. And although, Homer doesn't tell us which part of Thrace conquer the Rhesus, But if you think that the name of his father, of Iionea, is related to the name of the ancient city Iionos, located at the mouth of the Struma, We understand easily that he thought by the Greeks that reigned in Pangeo and surrounding area.

Let's see, though, the same Homer, in the tenth Rhapsody of Iliad, (verse. 434 subs.), How describes the arrival of Risos with the Thracians in Troy: ' Oid ' apaneythe neilydes Thriϊkes, end other, in de sfin Rhesus King, paϊs Iionios. The ide megistoys idon kallistoys horses. Leykoteroi snow-bound, theiein d ' anemoisin omoioi. And the chrysw and chariot argyrw EF iskitai. And chryseia huge Teychea, miracle eye, ilyth ' operator. Although the th katathnitoisin eoiken andressin what foreein, but ' theoisin ' athanatoisi, (i.e., the Thracians and remote natoi, kainoyrgiofermenoi, latter than others, and among them the King Rhesus, son of Iionea, that t ' horses are the most beautiful and the most great from what I saw, whiter than snow and running like the wind. The chariot is nicely crafted with gold and silver and has come with guns gold, huge, Marvel to watch. Those not fit to wear mortals people, only gods immortal). Later traditions of the Greeks of the classical period, who rescued the originating from Philippi historian Marsyas, on "Macedonian stories», did the son of Strymon River Riso and Clio, one of the nine muses. (Apollodorus, though, in the Mythological library of, (1the book, verse. 18), reports that some considered him a son of the Muse's muse and others Efterpis Kaliopis).

So this mythological version, sublime is the piece that the tragedy of Euripides "RISOS", in which the dance, (in verses 347 Ki next), referring to the coming of Risos in Troy, along with the Thracians pangeo, to help the Trojans in the Trojan war, calls to the mythical King of Paggaio reason, telling him the following: Longitudinal, Oh the river game, longitudinal, Frygian to aylanaspastos eplathis, epei in Pieris matir everything over Te kalligefy- Ross River poreyei Strymwn, never place the melodist Muse by sinus akiratwn dinitheis ydroeidis, like iban efyteysen». (And free translation: You came you son River, in our primal scene now, kalodechtos, and "your mother here lead the Pierida and the River with beautiful bridges, the Struma, flowing its waters until the bosom of panwrias Muse that sings and who brought the world you). But in another point of tragedy, Hecuba, the Queen of Troy, addressing the Riso, the prosfwnei ' game of a melodist miteros muses, Thrikos Te Strymonos River ", (i.e. a melodist mother child Muse and the Thracian River strimonas).

The Rhesus well, According to Greek tradition, in the last year of the Trojan war came to the aid of Trojans, bringing together of white as snow horses, engineered by gold and silver chariot and from the same materials made wonderful weapons of. There was, Indeed, Oracle, that if his horses Risos ate grass and drank water from Trojan the Xanthos River, Troy will be saved, but the Oracle was not fulfilled, After that night the arrival of Risos, killed the hero Diomedes, While Odysseus grabbed t "horses, as for all that informs us of Homer in the tenth Rhapsody of Iliad. The Trojans buried under a tumulus, constructed by taking care of Hector and his 29th body there for centuries. (Here is worth to mention that the name of Risos brought upon a river of Dardania, in the cosmogony of Hesiod was the son of Oceanus and Tethys, stems from the IDA and poured beside the right bank of the river Granicus, Today it is called ' Karatzi – tea»). When the Athenians wanted to put their foot in the rich area of Paggaio and metalloforo decided, the 437 e.g., to send a group of settlers in the city of Nine streets of Struma, with settler in Agnwna, had to legalize their presence there.

So, applying an Oracle who gave them the experienced diplomats priests of the Oracle of Delphi, they sent people in Troy, who opened the night the tumulus, where was the reputed to Trojans and holy for the Thracians relic of Risos, and after I placed them in "porfyran" mantle, carried it hidden in Athens, from where it received the settlers and carried in the country, in which the hero had reigned where, in place of the Thracian city of Nine Thoroughfares founded Amphipolis and atop a hill of, They rained the Struma, buried the remains of his son Struma, the Risos, While just across the street from the monument erected for the hero, built an altar, He dedicated to his mother, the Muse Clio, (Marsyas the younger or the EC Philippi of Macedonia, in his work "Macedonian"). M "this ingenious and, I would say, International, diplomatic tactics, They suggested the Oracle of Delphi, the Athenians "legalised" the expansionist aspirations in the region. Although the Greeks and, I have already mentioned that the Thracian King Rhesus was pangeo. For the past, though, in fact he was a God, whose worship is not only known in Amphipolis, "but in other parts of the ancient Thrace.

But in any case, We know that even up to the 3rd century a.d.. the Rhesus worshipped by the Thracian tribe of Bisswn Rhodope Mountains like God, with most known qualities of the Hunter and of the therapist, which is strongly reminiscent of another God of Thracian people of all ancient Thrace, the Main hero or Ember Knight, also God the healer and Hunter and for "what many authors consider that under the two names is the same great goddess of Thracian, the highly revered in "them, This Sabazioy Dionysus or Bacchus, whose relations with our hero confirms the epilogue of "RISOS" tragedy of Euripides, According to which,Rhesus o, genomenos anthrwpodaimwn of Dionysian procession, IE genomenos from man demigod, will forever be Prophet of Bacchus, hidden in the caves of the Earth of Paggaio hides silver, where, not only will the introduction of coming events, but will send himself the divine guidance to the prophets of the, for whom will be revered God. (Lyrics 967 subs. «..th γάρ s tayton pote, t ' opsetai demas eisin nor mother, kryptos d ' ypargyroy in antrois of chthonos, keisetai Gazer faos anthrwpodaimwn, Bacchus Prophet so Paggaio toisin eidosin wkise modest rock God»). Let's see, though, who were these prophets of Risos in Paggaio mountain. It is known that over the air tribe resided Pageo of Satrwn, a Thracian sex, related with the machairoforoys Rhodope Bissoys.

The war this clan, that was the best part of the mines of Mount, It was also in the supervision and care of and the famous sanctuary of Dionysus Sabazioy, located in one of the highest peaks of Mount. Insured their Satres mountains, When Herodotus visited themselves and the Temple of Bacchus, as he tells us, kaychiontan that didn't give Earth and water nor to Darius, Neither Xerxes and that were not nationals of any man ever on Earth. Of course their sanctuary was not someone like Greek temple, but, probably a barbaric sanctuary, without buildings, without illustrations, or better some cave, like the one in which Sophocles, in Antigone of, It said it had closed Dionysus King hedoni Thracians Lycurgus. The Bacchus of Satrwn, as the Apollo of Delphi, in the sanctuary in Pangeo had a woman as "promantida", i.e. like Pythia. As Delphi so here skilled priests, the "prophets", give shape and transporting their garbage to the faithful that God inspired oracles in "this woman, When this fall in trance. As in Delphi, These oracles, even after their pension was not entirely clear, as for all those telling us he Herodotus, who ascended as a pilgrim in the large and famous this sanctuary of Pageos, with simultaneous aim to collect the necessary for the history of information and compare the Oracle of Paggaio m "that of Apollo at Delphi. Particularly noteworthy is the fact that these priests, the prophets who gave shape to the inarticulate cries of promantidos, It wasn't Satres.

Herodotus pointed with particular attention this important event. Was Bissoi, i.e. they belonged to the great, Thracian tribe who lived in the Centre of Thrace, from the peaks of the Rhodope Mountains to the banks of the Ebro, who thought, between "all Thracians, as the most experienced in knowledge of transported rituals, a and, owing to their geographical position, they were guards and priests of the Central, the "national" sanctuary of Dionysus, It was of course in Rhodope, that is in the heart of Thrace, as Delphi in the heart of Greece, and it was, of course, more important and more old than "that of Pageos, which, Although Herodotus and Euripides's tragedy "RISOS", It was very important during the 5th century. e.g., though it must have been something like annex of the sanctuary of Rodopi. This explains the fact that Bissoys called Satres priests from the main temple of Dionysus in Rhodope, to perform tasks in their own holy prophets, in Pangeo.

I conclude the charming story of the mythical King of Pageos, Expressing its concern that started in the preface of this little, amateur paper. According to the historian Marsyas painter Philippi, "sanctuary of Clio in Ochi Amfipolei, the Risos founded across the monument, on the Hill, thereby ". Does this altar of Risos, that was "before" from the Temple of the Muse Clio, (which the late Mun. Lazaridis found on small hill, South of the current village "Amphipolis ' or ' Neochori»), It was there where he later built a large tomb of Hill Kasta; Archaeologists will respond soon to him my reflection!
THODOROS LYMPERAKIS DIMOSTHENOUS STR.