Phillis, the daughter of Amphipolis and the worship of Cybele, and of ' Attios

The section between Mt. Paggeo and the Aggitis River Strymon and called «Phyllis», as testified by Herodotus:
«And the Earth this on the mount Pageon kaleetai Fillis, katateinoysa to esperin on each Aggitin issuing unto the river Struma, and to mesimbriin teinoysa s this Struma '
PERFORMANCE: "And this site, located around the Pangeo, Fyllis said, and extends westwards as the river Aggitis which pours its waters into the Struma, While southwards extends as the Strymon» (KING ISTORIAI, Version Gkobosti – Book VII "POLYMNIA") 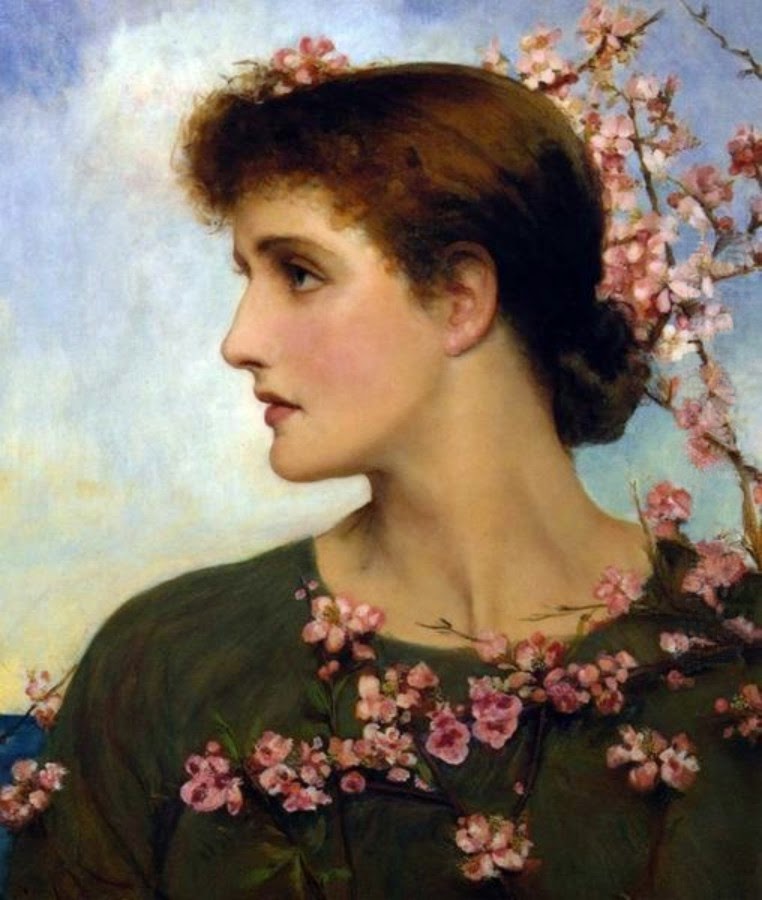 According to another tradition, the name of the region of Pageos, Rodoleibos came from his daughter Sithwnos, the Fyllis, which aleifeto with extract from the efyonto wheel there and have been linked to ritualistic cults and customs of the area. The rose-rosette, is solar symbol belongs to the solar deities and Sun of Vergina, We see it indicates the worship of the Macedonians in this. 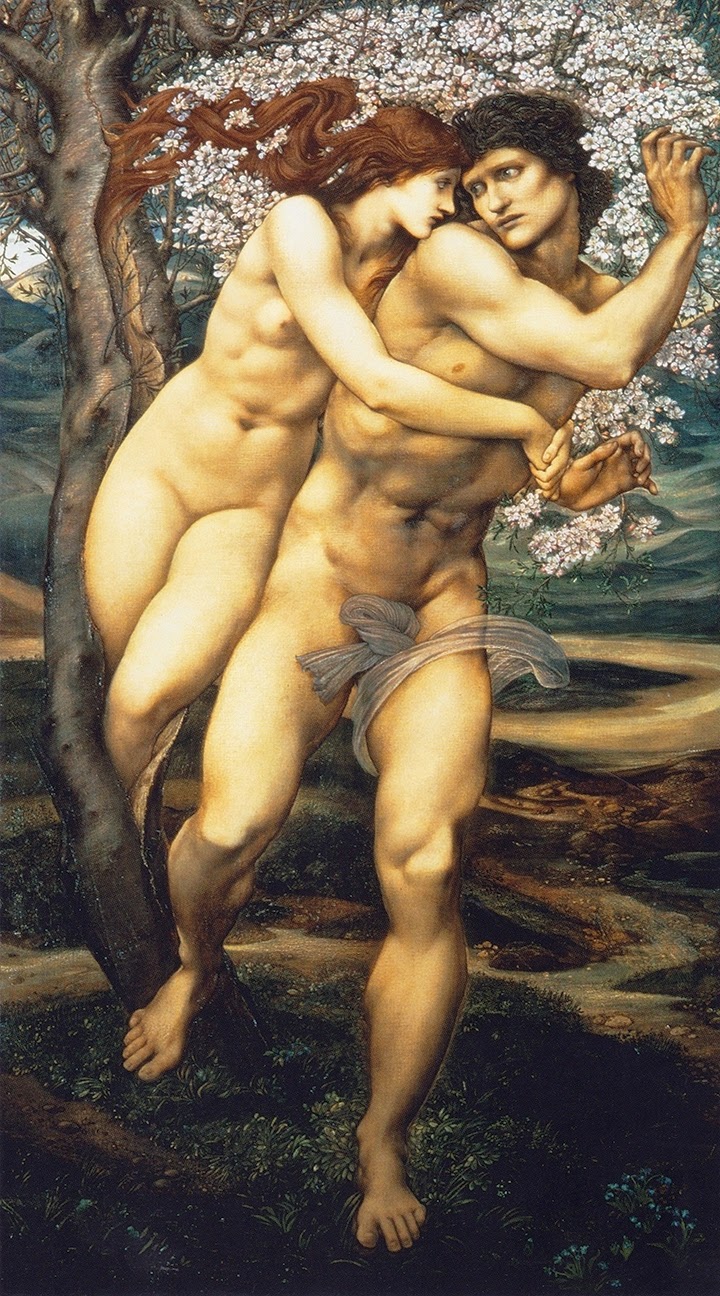 As we have mentioned in our previous post THE SFIGGES AND THE TELETOYRGIKOS AKEFALES APAGCHONISMOS the son of the hero Theseus and Faidras, the Minotaur, After the Trojan war he chose for his beautiful wife Fyllis, as a result her father and King of Hedoni, Sithwnas, anointed him his successor – the Kingdom of Thracian sex was a major commercial and economic station Amphipolis.

The Minotaur however had to turn quickly in Athens and before leaving, vowed to return that quickly Fyllis. Fyllis the xeprobodise in the nine Streets (the later Amphipolis), they gave him a box, a kisti Rhea, which had to be opened only when we lose hope that it will xanagyrize near the. The Minotaur was unable to reach quickly in Athens, Since leaving, a tempest the pulled out in Cyprus. Nine times downloaded fyllis from the city to the port to see if the boat of her beloved arrived. But in vain. To commemorate these nine days, they named the place, "Nine streets". Desperate and convinced that the betrayed, hanged himself from a tree, hanged. 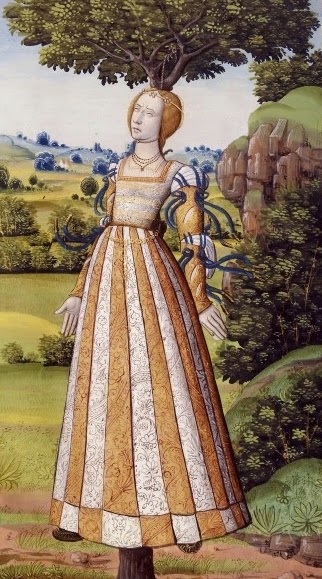 The Gods, from compassion, transformed the Fyllis in tree, in almond, which became a symbol of hope and rebirth. When the Wanderer, full of remorse, Demophon returned, Fyllis found like a naked dried tree without leaves and flowers. Desperate hugged the tree, which suddenly showered by flowers, showing that love cannot be defeated by death. 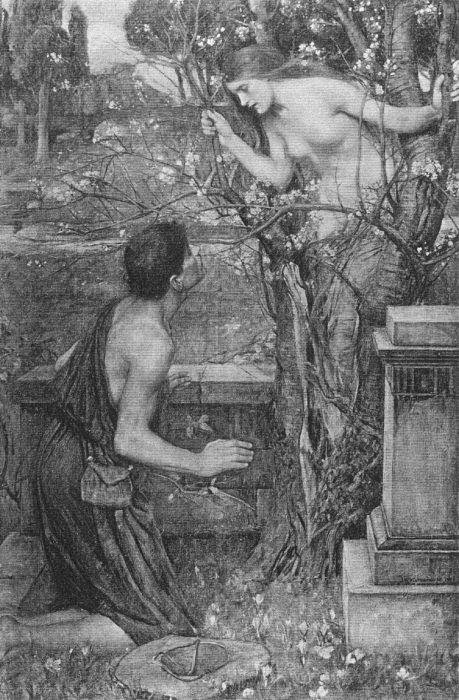 Inland deliveries the almond tree one of the Trees of life and is one of the trees the great mother, Rhea-Cybele as Queen of Thiron identified with the worship of Artemis, Demeter and Persephone. On frygikes traditions, the almond tree symbolizes the cause, the source of all things. Represents the spring, the vigilance and the awakening. Associated with the birth of Atti, After the almond tree grew from the organs of Agdistis ermafroditis. Cybele enthroned in chariot that draw two lions, the second half of the 2nd century BC., Metropolitan Museum of Art

Amorian tradition for local’ This says that Zeus, in his sleep on, ekspermatwse on Earth, and that time she gave birth to a demon with double genitalia, man and woman I him/her named Agdisti. The gods, Fearing him/Agdisti, cut off the men's bodies. And re’ These grew an almond tree. When ripen the fruits of, they say, the daughter of Sakarya River, the nymph Sagaritida, the cut. And like having in the bosom of the, those lost immediately, and she was found with child in the belly. And when she gave birth to a child left ektheto and peripoiotan a scapegoat. As it grew, the beauty of surpass human measures and then fell in love with the Agdisti. When the Attis grew, his relatives sent him to Pessinounta to marry the daughter of the King. The time that was sung imeneo, shows the Agdisti and Attis is occupied by fad and cuts his genitals. So did and he gave him to wife the daughter of. The Agdisti regretted for the sufferings inflicted on Atti and succeeded by Zeus to not sipetai any part of the body of Attios nor melts. (Παυσανίας 7.17.10-13) 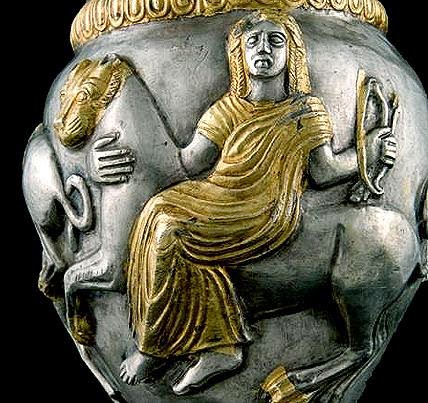 Cybele's sacred animal ippeyoysa, the lion, brandishing a bow and arrow as Artemis, in precious silver vase from the Thrace of the late classical era

Other additional versions of the myth by Arnobio places the story in the frontiers of Phrygia, to the point where there was a desert Crag called Agdos (the term Twin). There Deucalion and Pyrrha, the father and mother of the human race, they had crafted people in stone, and Cybele, the great mother of the gods, She was chiseled in this rock-for’ This goddess was worshipped in the form of a raw stone, a black betyloy.

Zeus wanted to unite with her but did not succeed and left his sperm in’ an adjacent rock. From this was born the ermafrodito creature Agdisti who got drunk and castrated Dionysus. From his blood grew a pomegranate tree. Fruit from this pomegranate tree placed in the bosom of the Dwarf, daughter God of Sakarya River of Phrygia, and she got pregnant. The Sangarius ordered to let the child who was born, ektheto. The upbringing of the infant took a scapegoat, so I got the name of Attis, in Frygika, «attagus», means goat, but it also has the meaning of "the handsome". The Agdisti claimed the Atti, Cybele and the Pessinoyntas King Midas for his daughter's account. Not to take any other, the Agdisti enebale in Atti and the sequence of the fad, the Nice eynoychistike Attis beneath a pine tree and died.

Cybele buried members of, but from the blood of the wound of menexedes that surrounded the sprouted pine. The daughter of Midas committed suicide from the despair of. Cybele the burried and over the grave of grew an almond tree. Jupiter, moved by the prayers of Agdistis, the body of Attios agreed to not decay, his hair continue to grow and the little finger moving. The Agdisti was carrying the body in Pessinounta, City in upper Phrygia, near the Sangarius River, where the buried, He built a temple, He founded the priests ' Attios brotherhood and established celebration to honor him.

In the courtyard of the Temple grew an almond tree. End, It is said that Agdisti is an adjective in Phrygia to Cybele or Rhea, Therefore the Agdistis is a form of the goddess in Phrygian cherished better. 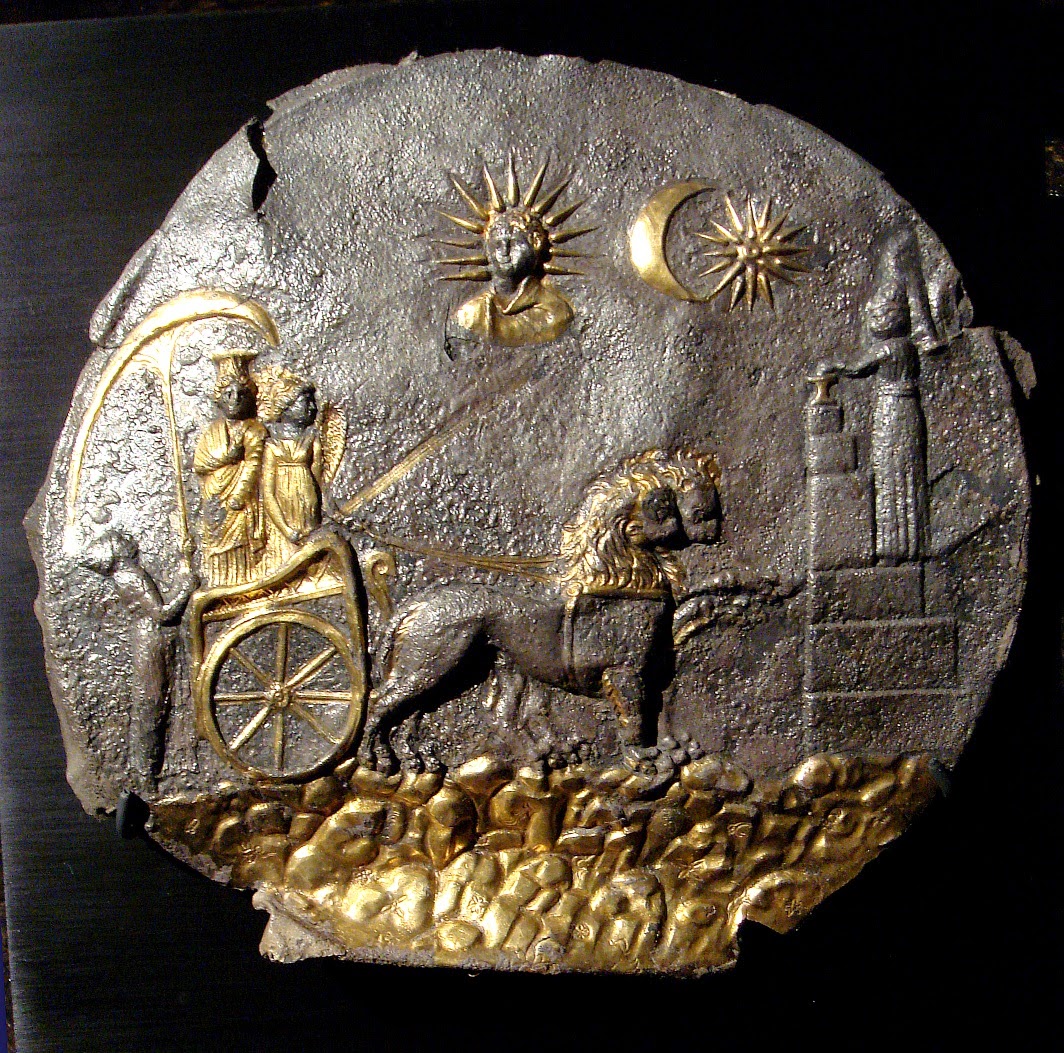 Cybele in a chariot of Lions

The primal deity worshipped in the Sanctum which Attis was excavation in the North-West of Amphipolis. The pwrolithiko building has dimensions 9 × 4.10 m. In the center of the building, It was revealed a circular fireplace. The identity of the sacred was confirmed by the discovery of a column and apotmimatwn figurines anathimatikis, the subject matter of which falls in the pictorial cycle of frygikis divinity.

The myth of Attios and Agdistis is the story of death and perpetual rebirth of life (Pine, almond tree, Pomegranate tree, menexedes) symbolized with the ceremonial hangings and dendrolatreia.

The cult had rich sacramental character everywhere where had spread, and the announcement of hidden so-called give and not dictated by simple honesty, but it was a condition for beneficial effect of secret rituals, ieropraxiwn to the individual and to the community. In worship existed and worship dance: The Korybantes orchoymenoi presented and in myths as demons following frygikis's great mother whose always dragging chariot Lions. In the worship of, Select dance performed the ceremonial orchisi, that is old means of devotional, more effective than the simple prayer. 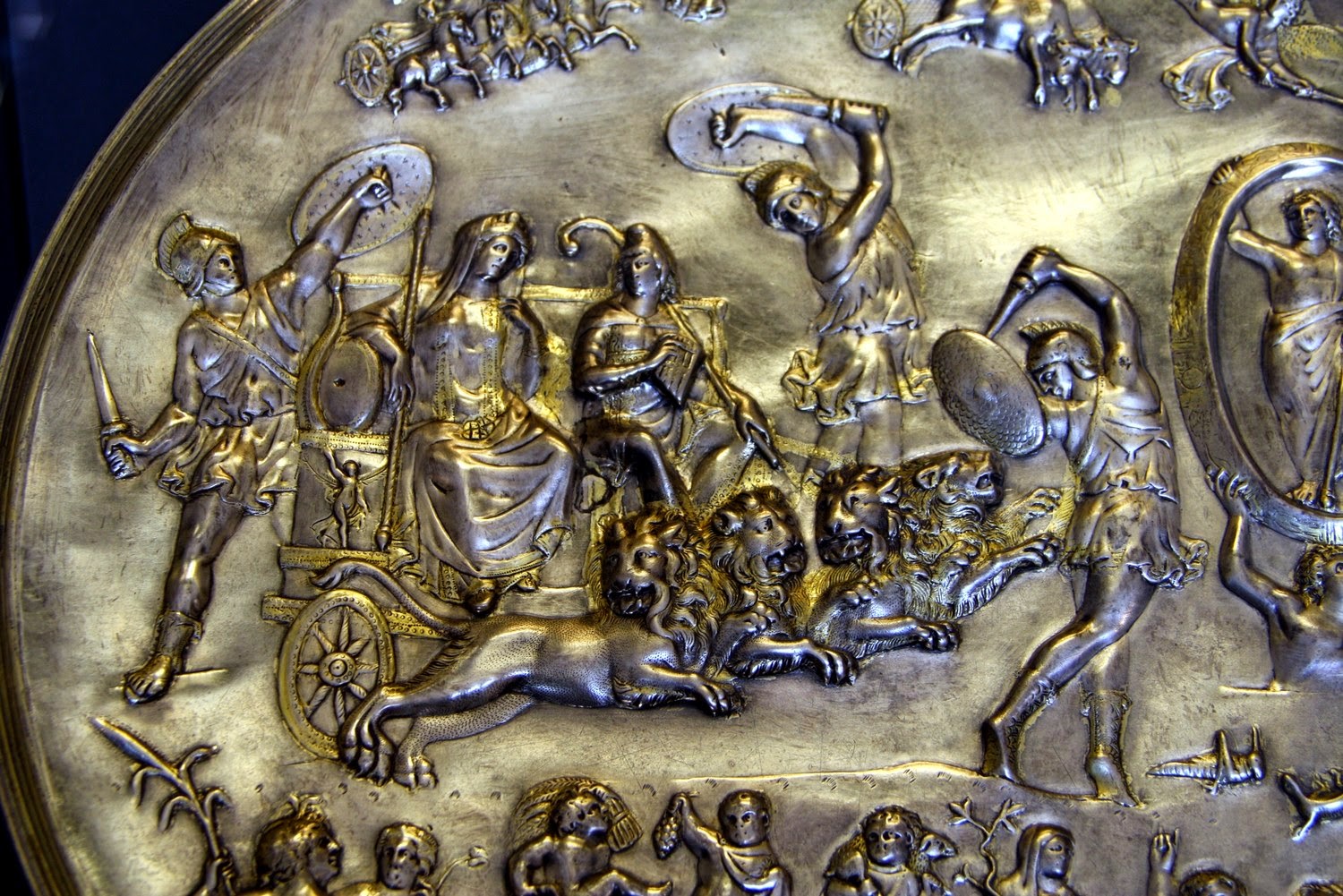 Cybele and Attis in chariot that draw Lions, Archaeological Museum Of Milan

The mysteries easily offered for allegorical reference to the rebirth of nature and Great Mother Earth as he identified himself accordingly with the Dimitra and God of vegetation Dionysus, somehow «secret», i.e. allegorical. Flowers of Fyllidas ,the almond anastimenis, the first flowers of the year, are those who send the upbeat pulse over the frozen earth, calling begin a new cycle, a new dance, in the perpetual process of the rebirth of nature and life. 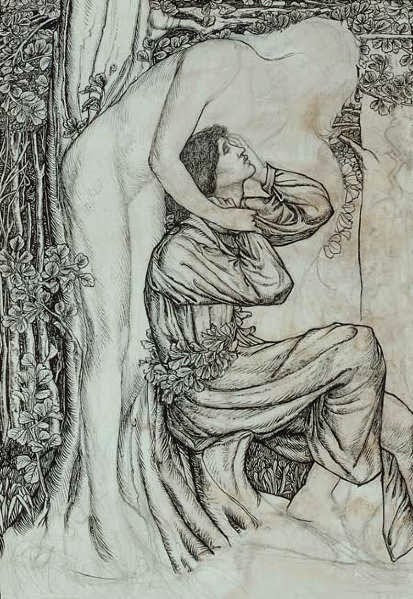 Tender and sensitive, the anthopetala of almond, dare to make life afypnistes, thysiazomena in icy air. Similar to the temperaments of young girls that are pure virgins, Daughters, that dancing their dance ritual involved him in orgiastic intoxication, ready and those sacrificed to apagchonistoyn, the call of the great Afypnisti of love, in order to regenerate symbolically to a higher ontological Unity.